Also known as DGU’s (Double Glazed Units) IGU’s are window units made of multiple glass panels with a spacer and gas between them. They can provide better performance for windows where required. The common benefits are to keep the warmth in throughout winter and heat out during summer. 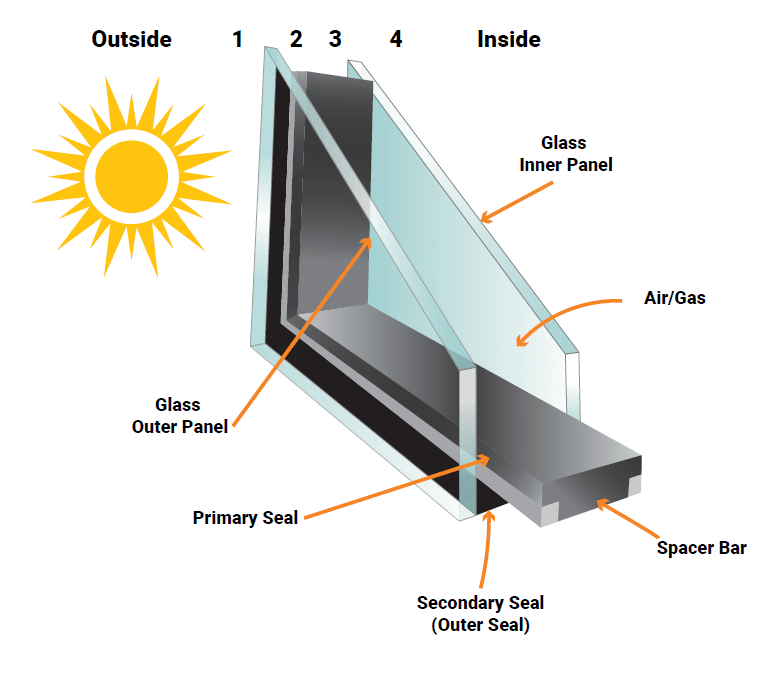 Glass – Glass in an IGU is used to provide natural light and maintain internal temperature conditions and
protection from outside conditions.

Spacer Bar – Glass panels in an IGU are separated by a ‘spacer’. Spacers can be found in a number of
materials, each of which has an effect on the performance of the IGU. They are often made of aluminium or
an insulating plastic composite known as warm edge spacers. Warm edge spacers get their name because
they are more insulating and not as conductive as aluminium spacers. Current available materials are
aluminium, steel, stainless steel, thermoplastic, and plastic.

Gas fill – To improve the performance of an IGU, gas filling of IGU’s is an option provided by manufacturers.
Inert gasses such as Argon and Krypton are used in place of just air in the internal cavity of the unit.

Sealants – Sealants are used in the construction of an IGU in two stages. A primary seal is used to fix the
glass panels to the spacer bar, and a secondary seal is used to seal the outer edges of the complete unit.
The sealants purpose is to prevent moisture penetration into the unit. Primary sealants are often used in
conjunction with aluminium spacer bars and act as a barrier to stop thermal transfer from the two glass
panels touching it. Warm edge spacers are often applied with a self-adhesive primary seal, and due to their
material makeup are already far less conductive than their metal alternatives. 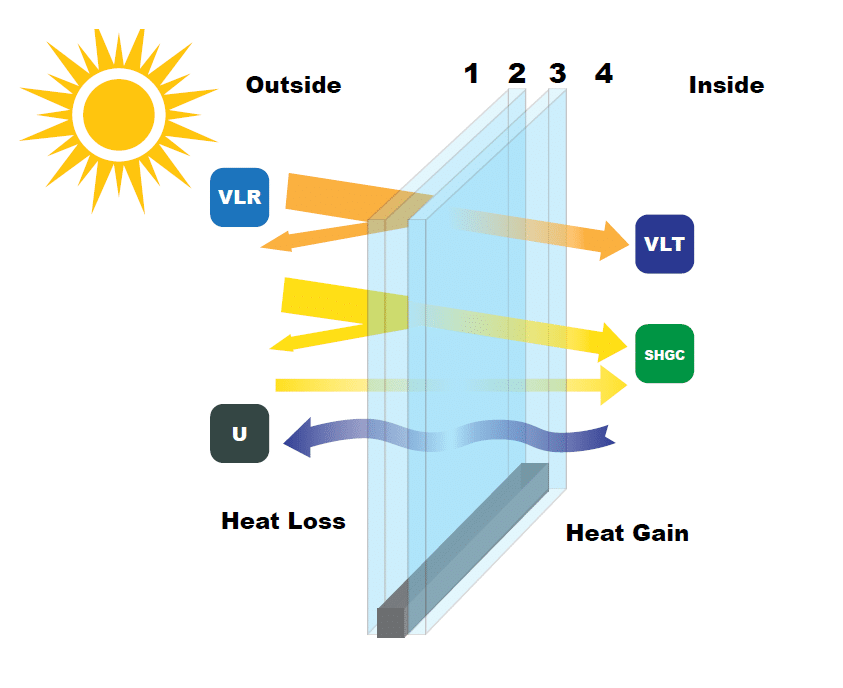 Hot Air always moves towards cold air. By reducing the loss of heat from the warm side to the cold side of the window, IGU’s can reduce the heat loss in cold weather, or vice versa.

VLR: The percentage of visible light that is reflected from the glass surface(s).

VLT: Expressed as the percentage of visible light that is transmitted through a glass type

SHGC: Solar Heat Gain Coefficient. The proportion of directly transmitted and absorbed solar energy that enters into the building’s interior. The lower the number the better the glass is able to exclude solar radiation.

U-Value: The measure of air-to-air heat transfer (either loss or gain) due to thermal conductance and difference between indoor and outdoor temperatures. The lower the number, the better the insulating qualities of the glass.

IGU’s have many benefits compared to single glaze windows, one of which is its sound insulating ability. Changing the thickness of glass used in the IGU or combining a laminated glass panel can greatly improve the insulating properties of the IGU.

Image 1: Would have the least amount of sound insulation.

Image 2: Would have a better sound insulation, but not the best.

Image 3: This build up uses glass panels of different thicknesses. Due to the change of thickness the frequency dampens significantly when passing through, giving improved acoustic performance.

Rw : Weighted Sound Reduction Index. Is a number used to rate the effectiveness of a soundproofing material. The higher the Rw number, the better a sound insulator will be.

What people are saying!